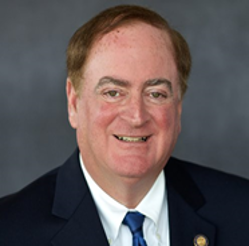 Keith Curry is a nationally renowned financial advisor and government consultant having served for over 24 years as a Managing Director of the nation’s largest public finance advisory firm, Public Financial Management (“PFM”). While at PFM, Mr. Curry directed the National Transportation, Environmental Finance and Western States Business Groups. He personally advised on more than $15 billion in infrastructure financings and developed the long range capital improvement plans for some of the nation’s largest transportation agencies. He was also a member of the firm’s Strategic Planning Committee and Board of Directors.

From 2015-2017, Mr. Curry was a member of the Board of Directors of MBIA Inc. (“MBI”), a publicly traded bond insurance firm, where he served on the Compensation and Governance, and Finance and Risk Committees of it’s Board of Dorectors.

Mr. Curry is the Past President of the National Association of Independent Public Finance Advisors. Mr. Curry has earned an MPA, Certificate in Urban Studies and BA in Political Science from California State University, Long Beach. He has also completed executive education programs in Driving Government Performance and Negotiation from the John F. Kennedy School of Government at Harvard University.

Mr. Curry is currently a private investor and business consultant.